For discussion of new pet colours- speculation and discussion of colours in general should be placed in New Features or Misc.
Post Reply
10 posts • Page 1 of 1 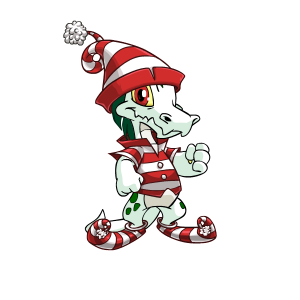 The hat is too big, imo. And krawks wearing shoes disturb me greatly.


Just the shirt on the krawk would have been fine enough.
Top

You know, the defected feet of the krawk actually work in elf shoes. But that's it.

The hat has a unique touch, I actually like it XD The one sleeve on the jacket is too pointy though

A comedy elf Krawk, not sure if I like it or not. With the pugnacious fist and silly costume it looks like it's just come out of a pub in the wee small hours of Christmas Day looking for a kebab and a fight.

Might be better as a base, that looks pretty.

Strangely I rather like it, I'm not sure why. It may be the whole candycane coloured clothing. I rather like that over-sized hat, there's some nice detail in the bobble on the hat and shoes. I wouldn;t mind seeing it without the clothes, to get a better look at the base colour. But from what I can see it reminds me of a mint like colour. I like it xD

It's alright, though I could have sworn there was already a Christmas Krawk in the same colourscheme as the Wocky. Remember, if you don't like the hat, you can always take it off!

It's very cute, but it's still not a Xweetok.

Oh well, there is always next year.

I like the shirt. Makes me think of Where's Waldo.

It's very festive and kind-of crisp looking. I like the contrast from the read in the clothes and the green on the base. The fact that for the shadows they used a light pale greenish-blue rather than gray makes the Krawk look even more wintery and festive. I really want that hat.
Top
Post Reply
10 posts • Page 1 of 1

Users browsing this forum: No registered users and 22 guests