It would seem a bit odd to start a thread just for one update, but since it seems there will be more, I thought I'd go ahead and start a topic for small art updates that don't really have a big effect on gameplay or the appearance of the site.

As announced in today's news, the Grooming Parlour shopkeeper has been updated. 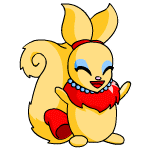 Oh what a super-wonderful day! Can I interest you in anything?

I think this was long overdue and there's really nothing to fault about the new look (except that anyone who's used the old image in a layout will find they now have a squished version of the new one). The Usul is very cute and individual, while still being recognisable as her species (although they could have brought the ears out a bit more-- at first glance I thought they were missing altogether). I do wonder why there'd be wigs in the Grooming Parlour, since they're considered to be a clothing item in Neopia, but that's just a minor quibble. On the other hand, I do see what look suspiciously like electric light bulbs-- have TNT decided that electricity is more or less ubiquitous now? That was always a little bit of a fuzzy area in canon.

Those aren't lightbulbs, they are enslaved Filamen.

I didn't care for it at first glance but it is growing on me - especially when compared to the old shopkeeper image ;-) But, yeah, Garin.

RD, I think they more or less just make it up as they go along. There's still several electricity-themes stocks in the stockmarket as well as various items around the site that just wouldn't work without it. Maybe those lights run on faerie dust? (ha, you can tell this article is rather old - it references a song by the Smiths)

I was a little bit perplexed by the fact the usul is painting that other pet's hair with a brush. That's just... weird.
Books Sail needs

That's fairly normal practice for highlights, like in this picture. Bit weird to paint your whole head, but I suppose that is how Neopets change their hair colour, with paintbrushes

Actually I had my whole hair painted with brushes before. It was a base colour and highlights so there was also a lot of aluminium foil involved.

Random interval: this story involves my mother, who sent me to my recently employed niece and her boss the fancy pansy haircutter and me not realising that the fancy pansy haircutter had decided that highlights alone were not enough and that she was painting my whole dark brown hair chocolate dark brown. That haircut/treatment cost more than oh say, 20 normal haircuts would have...

On the picture: I don't know. Neo has better artists than this. The shading is not subtle on some parts and seems to be missing in others.
Top

I'm not so keen on this one. Something about the lighting doesn't look right to me, somehow.

The old one (no I didn't save all of the shopkeepers what are you talking about.)

I don't like the Grooming Parlour shopkeeper much. She just looks.. weird to me. The grarrl.. yeah. The old one wasn't that good, but the new one looks off to me, too :/ I think it's the face shinies. Or the fact that, for whatever reason, the Grarrl looks ~different~ to me. Like they took it from somewhere else on the site, redrew it, and shoved it in here. If that makes sense.
Neopets: wocky_luvpet5566 | Subeta: omg_carrie
Top

the new Grarrl looks pretty funky -- really cool work with perspective. I like the 1/2 inch at the far right of the picture the best, just with the candle and the lighting/texture work on the edge of the chair.

I think the old shopper was so cute though, he looks so happy on the most uncomfortable chair ever.

Anyone got the old image for this? The Magic Shop has now been updated.

I think it looks fab for the most part, although I'm not sure what that Wheel of Excitement-looking thing on Kauvara's right is supposed to be. I really like the shiny round flasks.

It looks like something flat standing there. A big chair with ornaments in it?
Top

Larkspurlane wrote:
I think the old shopper was so cute though, he looks so happy on the most uncomfortable chair ever.


I like it for that reason too! But I didn't comment on the usul update! I love it!! I'm a little late to the party, that brush reminds me of a hair relaxer brush. Although, I don't think most Neopets need lye to straighten their hair.

RD, I'm not sure if this is the old image, but I think it was just a normal picture of Kauvara on all fours:

Thank you TCStarwind for the lovely signature! ^_^

Ohh, this is actually rather pretty. I think the wheel looking thing on the right is some sort of art deco wall hanging, but regardless, it looks strange. I really like the potion shelves.
Wanna donate towards my drink gallery, the Golden Goblet.
Top

I like the update too. I think the odd thing on the right is something they stuck there so they'd have many, many new mystery pic opportunities over the next few years. =D There are a shitload of possibilities, just in that far right quarter alone.

MM and Twofold rock, yo.
Top

It's either an art piece or a clock. I think I can make out a clock hand on the border of the picture
Lolly Gallery
Top
Post Reply
226 posts

Users browsing this forum: No registered users and 14 guests