Neopets topics not covered by the other forums go here.
Post Reply
9 posts • Page 1 of 1

Neopets appear to have taken an old bit of fanart (Kuitsuku ran Suta-Raito) and used it for a new item. I knew they'd fired all the artists but I assumed the people they'd hired in their place were actually drawing the items they're putting out now...

It's interesting, because IIRC the terms and conditions say that if you produce art, TNT is allowed to do what they want with it, basically. So they're not doing anything legally wrong.

As much as it sucks that this artwork is being used without permission, it seems like it's preferable to the awful quality art in some way.
Books Sail needs

No, they do not have the legal right to any fanart.

Neopets' ToS says that they retain legal right to re-use images submitted to them via their contests and articles. That is, art that is willingly given to them to hold. This is art that they straight-up ripped from someone's personal graphics website and used for an item without even asking. Regardless of the characters shown, the artist always maintains legal trademark to the image itself and its use. If it is a trademarked character, the owner of that character has the right to pursue legal action. Suh as Hasbro did on a few occassions. But never to use the image without permission for their own products. That violates the artists' trademark.

Kuitsuku also makes a career out of her art and it isn't fair for it to be used to for things she does not agree to without her permission or even any notice.

She has the absolute right to pursue legal action. And I hope that she does.
Top

I'm pretty sure it's copyright that the artist owns, not a trademark. Trademarks have to be registered, but copyright is automatic and usually belongs to the creator. As long as they didn't give the rights away (like submitting it into a contest) then you're right that Neopets would not legally be allowed to use the image, even though the trademark of the Korbat would be theirs (if they have registered it, and I assume they have).

Anyway, TNT have given a crappy excuse that it was all just coincidence.

ETA: actually, the most interesting thing is that having said that "it's all a coincidence" they have effectively ruled out the possibility of saying "well, we do own the rights". Because if the latter was true, they would have surely said that, as it's far more convincing.
Neopets wishlists: here
Top 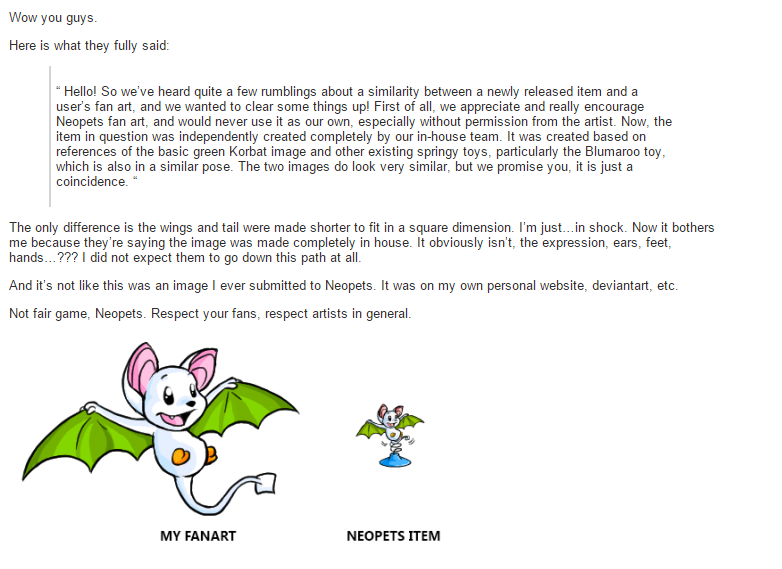 This is from Kuitsuku's tumblr.

She wasn't even upset until they tried to even claim that they drew it. I hope she does something directly, because if they do this once, they will do it again. It's a matter of time. I thought they were a better company than this.

Also, thank you. Copyright and trademark are something I mix up a lot.
Top

Baww, please, there is no coincidence. Nearly all the lines are a match for match. The feet are exactly the same.

Before customization, the Korbat had a black nose, which can be seen here in the fanart and item art. The green korbat now officially has a pink nose.
If the item is supposed to directly reference the official art, why does the item have a black nose?

There is no denying, there is nothing left to debate. The art was stolen, and it is unacceptable.
Subeta | Neopets
Top

I can't believe that someone at Neo looked at that and thought "Yes, that was probably coincidence."

I'm certain there is some new artist that thought they could use that image as a reference, maybe not even realizing it wasn't official artwork. And when it was brought up, someone who has no idea what they are talking about, glanced at the images and didn't investigate further.

I guess I was a little uncertain at first, but Ruinic, your image very clearly shows how identical the art is. The odds of the identical pose, body shape, ear angle, feet position, etc, are completely unreasonable. The images aren't identical, but they are super super close and the relation is undeniable.

I've removed all of my original artwork from the Neopets website because I don't want it stolen - I too do freelance art but ask that users who use it give me credit.

Having a company steal from someone whose livelihood is art just makes me sick. Instead of just asking users to submit art for new items (so many people would do this), they steal from those unwilling and won't even say that it was a mistake.

gg, rip another thing that I can no longer do on Neopets. I'm left with only restocking.
I can't figure out how to post my banner, so just imagine it here. <3 Much love!
Top

This is a good lesson for kids. Steal and lie enough and no one can do anything about it! No need to feel shame or anything, that'd just be inconvenient.

Users browsing this forum: No registered users and 10 guests