General help with pet/account decisions, galleries, CSS/HTML and so on.
Post Reply
4 posts • Page 1 of 1

So, I got a FFQ last night and already had one saved, so I used mine quickly on a whim and got a Transparent Wocky. I could use some advice on petpet matches. I don't always care about color matches as much as attitude/theme matches. She doesn't have a personality or anything, but I mean going with the bones/skull idea, and her name is oriisha. 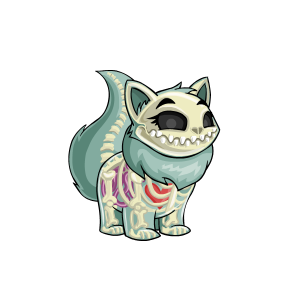 So far, my favorites are:

Faerie Sklyde - I like how it mimics the Wocky's intestines (?), even though it doesn't quite match color-wise. And, of course they have the skeleton thing in common. If the wings were a different color, I would probably get this one.

Mutant Peo - similar reasons to the Skylde, and it matches better. I guess it's my top choice at the moment but I'm a little tired of the artwork (I've had one in my gallery for years as it used to be one of my favorite petpets).

Ghost Gabar - I like that it's fluffy but it doesn't match.

Mutant Clompkin - I just like this petpet, and think the tentacles go well with the shapes in the wocky, but it clashes a little too much for me.

I don't care if the petpet matches necessarily, but I don't like it to look like I tried to match it and failed, if that makes any sense. I hope that gives an idea of the kinds of things I like.

Thanks for any suggestions =)
subeta . neo
Top

Hmm, a toughie. But I do like a challenge!

It's always looked like a brain to me. More organs:

Not a perfect match, but I kinda like it.

Sorry if I missed something in the description or posted something unattainable. I just got back from work and I may not exactly be in top petpet matching form ^^;
Top

Thanks for the suggestions - there are some good ones here. I'm on my way out but will look at them more closely tomorrow.

Edit: I think I like the Tapira and the Gwalla the best, but I'm still thinking.

I'm liking that Walking Carpet too.

Edit: I went with the Mutant Walking Carpet. Thanks again for the suggestions Rakumel.
subeta . neo
Top

Good choice, I like the Walking Carpet too XD It's just so...happy and deranged-looking. I almost got one for my Mutant Bruce some time ago. Might still do that sometime in the future.
Top
Post Reply
4 posts • Page 1 of 1

Users browsing this forum: No registered users and 7 guests